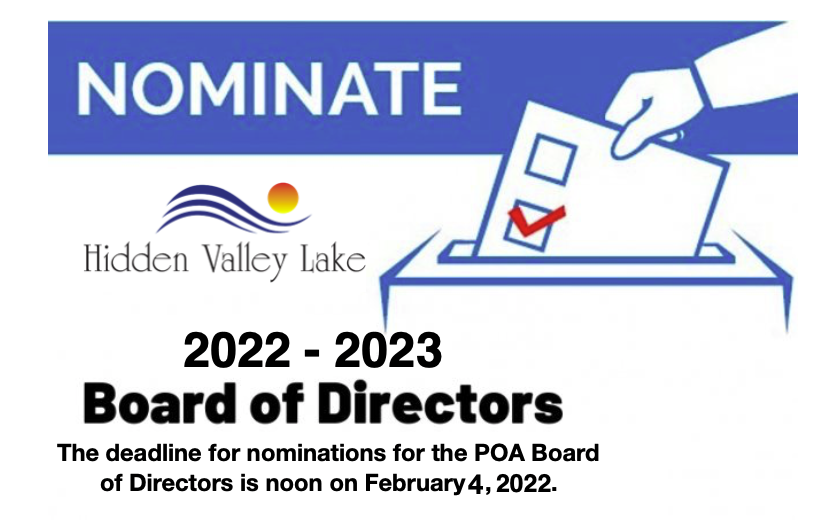 Meeting was called to order by Committee Chair Don Norris at 6:35 PM.

Minutes presented by: Becky Lortz for July 2021 and October 2021 meetings.  Corrections required: None.

Action Items for the Board of Directors’ Meeting:  One.

Meeting was called to order by Committee Chair Bonnie Starks at 6:35 PM.

Board Liaison Present: None.

Guest: Bonnie welcomed Janet Nye (Lots 1815 and 1816) to our meeting.  Janet told us she is very concerned about the inappropriate use of fireworks in her neighborhood. These fireworks issues have extended beyond the 4th of July holiday.  The problems involve noise but even more of a concern is the debris from the fireworks that land on rooftops and other inappropriate areas.  Janet is worried about someone getting hurt or property getting damaged.  Our HVL rules cover noise but what about other issues?  She (and her neighbors) would like for the Safety Committee to look into this situation to see what can be done to address these concerns.  Bonnie thanked her for coming and bringing these problems to our attention.

Deputies/Lake Patrol Report: Assistant Community Manager Dave Wismann presented the July/Year to Date 2020 Report (see attached).  He discussed the new format for the monthly report and pointed out the new Traffic emphasis.  Speeding continues to be a problem.  He also announced that Zack Compton is now the Lead Deputy of our HVL Deputies.

Action Items for Committee Members:   For Steve – Continue the revision/update work on the Nomination Rule and Election Notification Process begun by Ginny and Bruce.  Work with Rich Gannon and consult with Ginny as the work proceeds.  For Don and Steve – Research fireworks rules.  Are there any rules specifically about regulations other than noise?  For Bonnie – Contact Dave Patterson about the Lake Patrol contact process and responding to boaters who need assistance.

Action Items for the Board of Directors’ Meeting:  None.

Meeting was called to order by Committee Chair Don Norris at 6:35 PM.

Minutes presented by: Becky Lortz for July 2021 and October 2021 meetings.  Corrections required: None.

Action Items for the Board of Directors’ Meeting:  One.

Stay Up To Date

Take a moment and update your personal information