The primary goal of the Hidden Valley Lake Garden Club is to foster members’ interest in horticulture, gardening, and flower arranging. Educational demonstrations, programs and tours are arranged throughout the year for members’ enjoyment.

To encourage and promote community beautification, the Garden Club presents a Yard of the Month award to homeowners with especially attractive landscaping. Look for the yard signs from May to October, recognizing residents whose landscaping efforts have improved their lots as well as the community.

The Garden Club also promotes fellowship among the women of Hidden Valley Lake by sponsoring luncheons, a pontoon party and field trips.

We extend a gracious invitation and welcome to all new members. 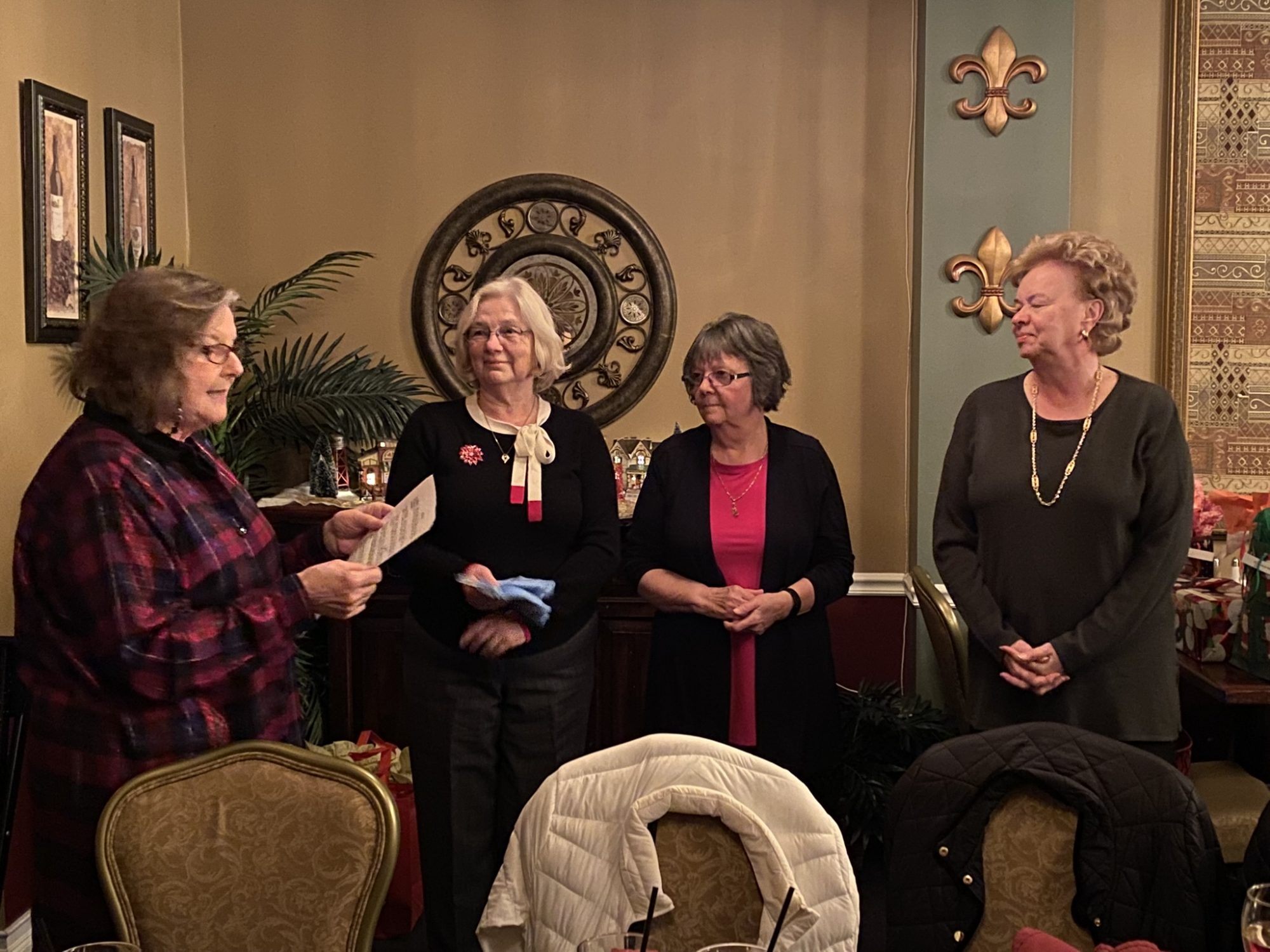 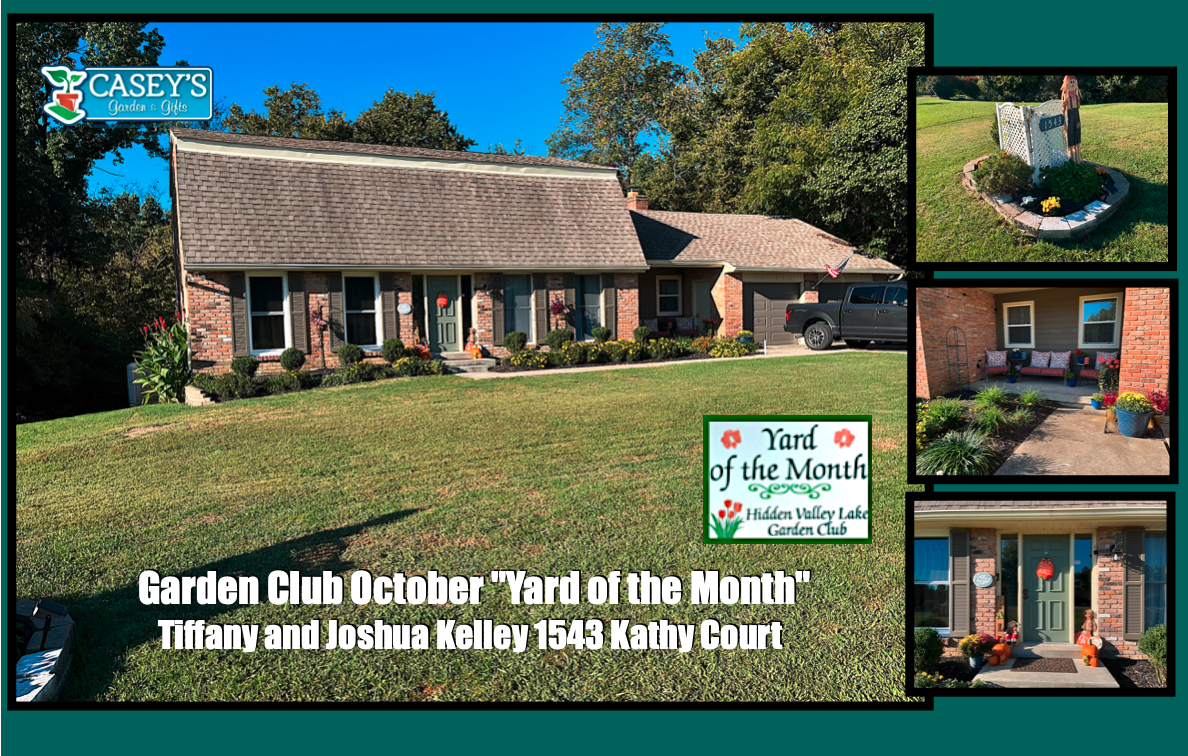 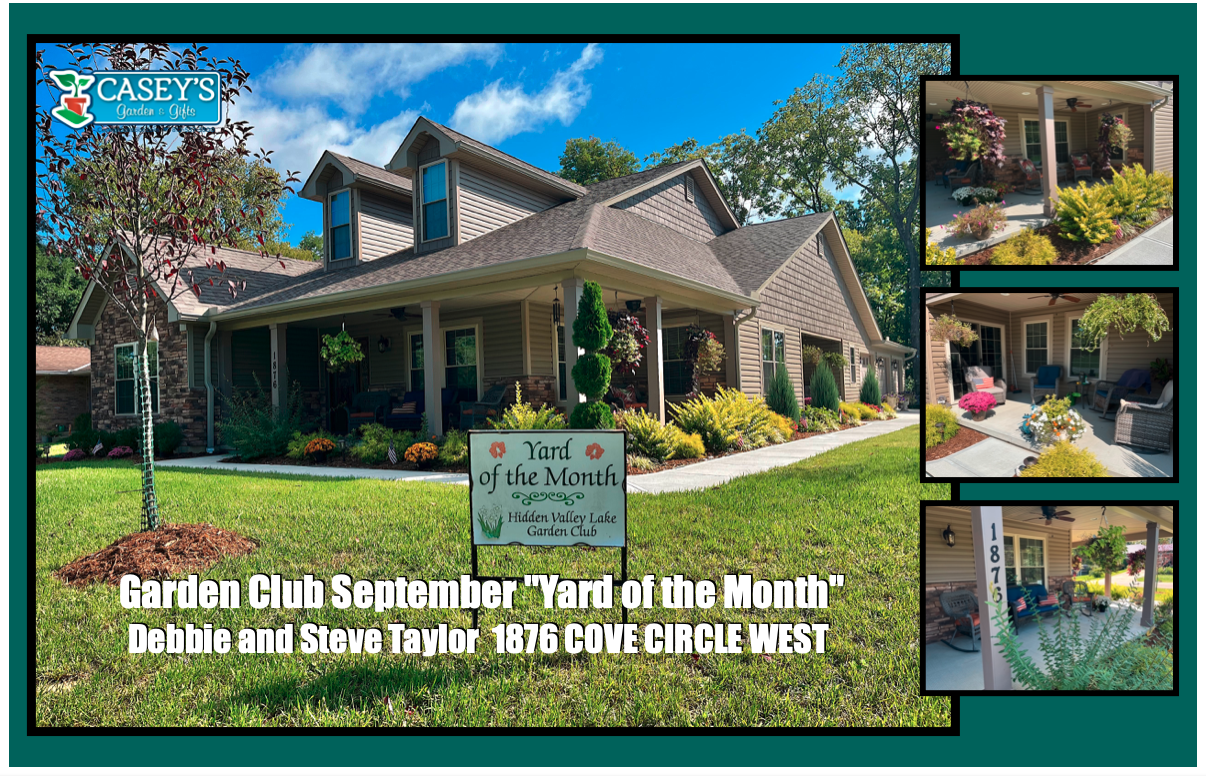 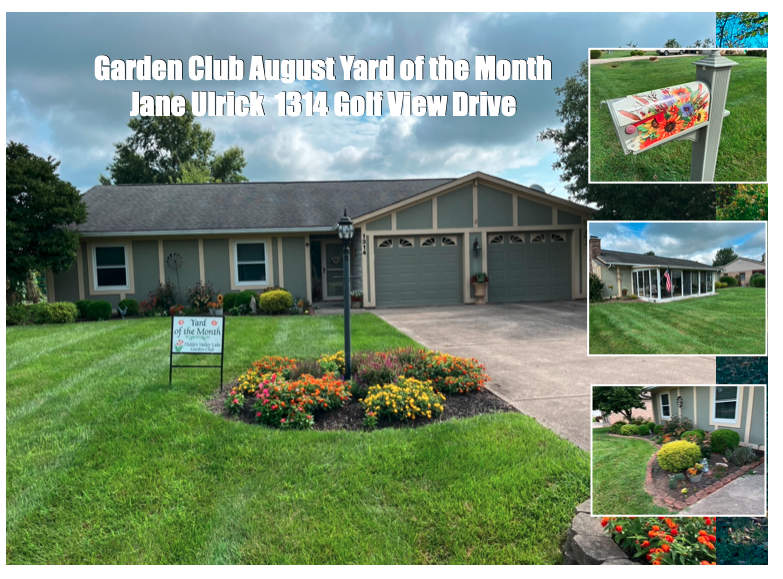 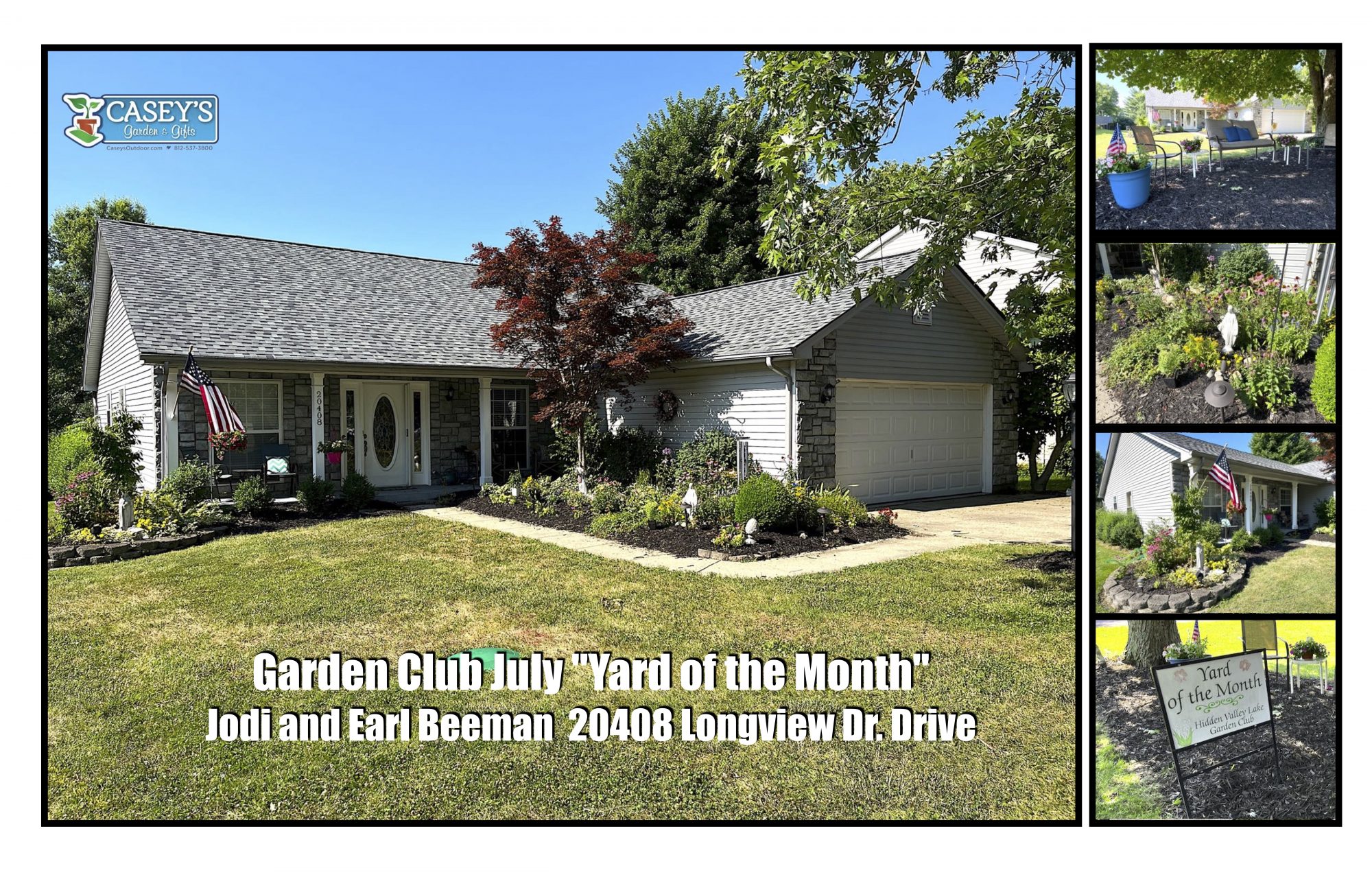 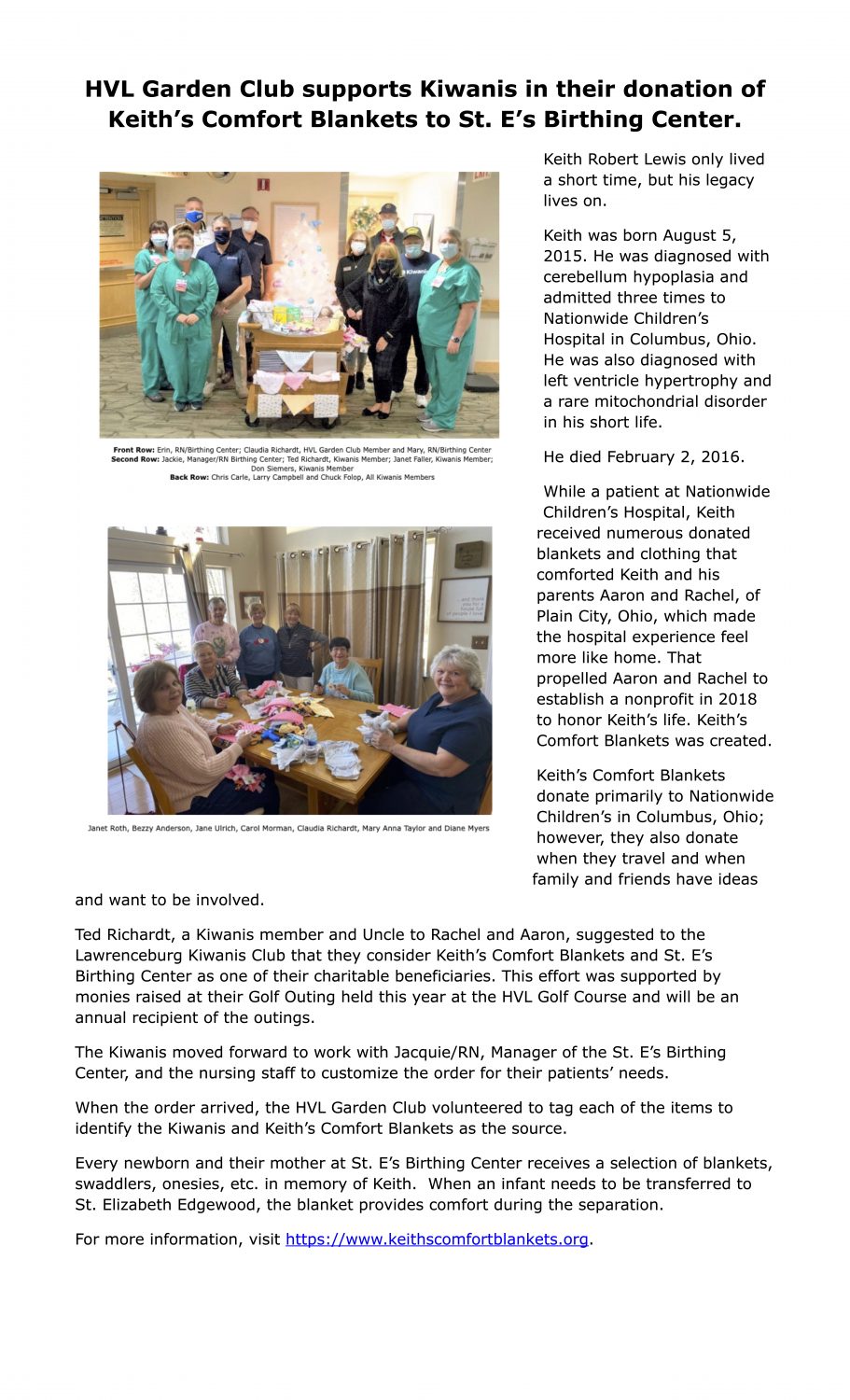 There were only 7 members present for the June 9th Garden Club meeting. The pledge of allegiance was recited, as well as the gardener’s prayer to open the meeting.
The minutes from the May meeting were read and MaryAnna Taylor made a motion to accept them as read. Jane Ulrick seconded the motion, and it was passed by members.  Sharon Hornung then gave the treasurers report and said it would be filed for audit.
Old Business:  There was no old business.
New Business: Luann announced that the road trip to the lavender farm had been cancelled. Everyone was reminded that the July meeting would be a picnic at the upper beach shelter. Bring a dish to share or brown bag it if you prefer.
The yard of the month committee announced that Diane Seivert on Longview Dr. had been given the award for June.
Tonia Eidam made a motion to adjourn as there was no further business. Jane seconded the motion, and it was passed by members. Ice cream sundaes and cookies were a great way to end the evening.
Respectfully submitted,
Carolyn Chasteen
Secretary

Garden Club Minutes, January 13th
Soup’s On
On January 13th, after missing a year due to Covid, the HVL Garden Club held its annual Soup Supper.  President Luann Roberts suggested we eat first, have our meeting, and finish with coffee and dessert.  Several members prepared delicious homemade soups.  Of course there were crackers, chunks of crusty bread, and warm corn meal muffins with plenty of butter to round out the meal.
After everyone had their fill, Luann called the meeting to order.  We recited the Gardener’s Prayer.  Carol Morman read the minutes of the December meeting.  The minutes were approved by Claudia Richardt and Sue Wessels.  Sharon Hornung gave the treasurer’s report which will be submitted for audit.
There were no committee reports.
Up for discussion were the dates for both the Spring and Fall Bunco parties.  Available dates were obtained from the POA.  After consulting with Wilma, our first and second choices will be presented to the POA.  Dates will be finalized and announced in the near future.  Echoes preparation is scheduled for January 26th and February 23rd.  The entire year’s schedule will be in our new garden club booklet.  Tonia mentioned that she had attended an event at O’Reilly’s Floral and Design in Harrison.  She spoke with the owner, who expressed interest in speaking at one of our meetings or having us go to her shop.
Old Business  Claudia said the local Kiwanis Club thanked us for tagging a selection of baby items as part of the Keith’s Comfort program.  Keith was Claudia’s great nephew who passed due to a rare mitochondrial disease.  The program was started in his memory.  The items are presented to each newborn at St. Elizabeth Dearborn County Hospital.  There will be an article in Echoes about the donation  and the support from the Garden Club for doing the tagging.
New Business  Luann asked for new ideas for programs at our meetings.  Tonia’s earlier suggestion would certainly qualify.  It was suggested that articles be placed on the HVL Website asking for help with planting.
Luann thanked everyone who had contributed to our scrumptious meal.  She added that sign up sheets for the various Garden Club duties would be passed around.  Tonia Eidam and Marti Sharpe passed the motion to adjourn.
The desserts were well worth the wait.  Luann suggested that we simplify hostess duties at our future meetings by only providing desserts rather than an extensive spread.  I guess this could be considered “food for thought”.  Haha!!!  The year is off to a good start as long as Carolyn doesn’t go out of town again.
Respectfully Submitted
Carol Morman
Interim Secretary

Do you know what kind of ball does not bounce or why Rudolph the red nosed reindeer did not go to school? The members of the Garden Club know. Those were some of the silly riddles they had to solve before getting a Christmas present.
The club held their Christmas party on December 9th at Market Street Grill. After ordering dinner, President MaryAnna Taylor held a short meeting. She recited the gardener’s prayer and then asked Wilma Gardiner to install the officers for the upcoming year. Luann Roberts was sworn in as president, Sharon Hornung will be the new treasurer and as always, Carolyn Chasteen will remain as recording secretary. MaryAnna dispensed with the reading of the November minutes and the treasurers report.
After partaking in an excellent dinner, members were asked to answer a riddle before opening their gift. There was a lot of lively conversation and good cheer while enjoying dessert. Everyone is looking forward to a happy and productive New Year.
By the way, snowballs don’t bounce, and Rudolph didn’t go to school because he was “elf” taught. Merry Christmas!

There were 17 members present for the Aug. 12th meeting of the HVL Garden Club which was held at the community center. The pledge of allegiance and the gardener’s prayer were recited to open the meeting. President, MaryAnna Taylor then thanked everyone who had helped get the new phone books ready for mailing. MaryAnna introduced Linda Hartmann who gave a short presentation to the group.

The minutes from the July meeting were read and Tonia Eidam made a motion to accept them as read. Luann Roberts seconded the motion, and it was passed by members. Jane Ulrick gave the treasurers report and Corresponding Secretary, Marcia Rizzo reported that she had sent cards to several members who had not been able to attend recent meetings.

Vice president, Kim Kubitz reminded everyone that the September meeting would be the annual pontoon cruise. Members should meet at the marina shelter at 6:00pm. They can bring a dish to share or brown bag their own meal. Also, she said that there will be an extra outing on Oct. 6th to the Gorman Heritage Farm. Those wishing to carpool should meet at Willies parking lot at 12:00.

It was announced that the yard of the month for Aug. had been awarded to Bill and Shirley Robinson on Interlochen Dr.

There was a brief discussion about whether the club should hire an outside contractor to trim the bushes at the front entrance. There was no decision made at this time.

Old Business: There was no further information provided by Claudia Richardt about setting a date and time to assist the Kiwanas with labeling baby clothes and blankets for donation.

New Business: There was no new business.

Having concluded the business of the evening, Marcia made a motion to adjourn that was seconded by Carol Morman. Members passed the motion, and the meeting was adjourned.

After the meeting adjourned, there were snacks to enjoy as Kim Benz of Onederings Lavender Farm gave a presentation on the benefits of lavender. There were also tips on successfully cultivating lavender plants in this area. All in all, a very aromatic evening. 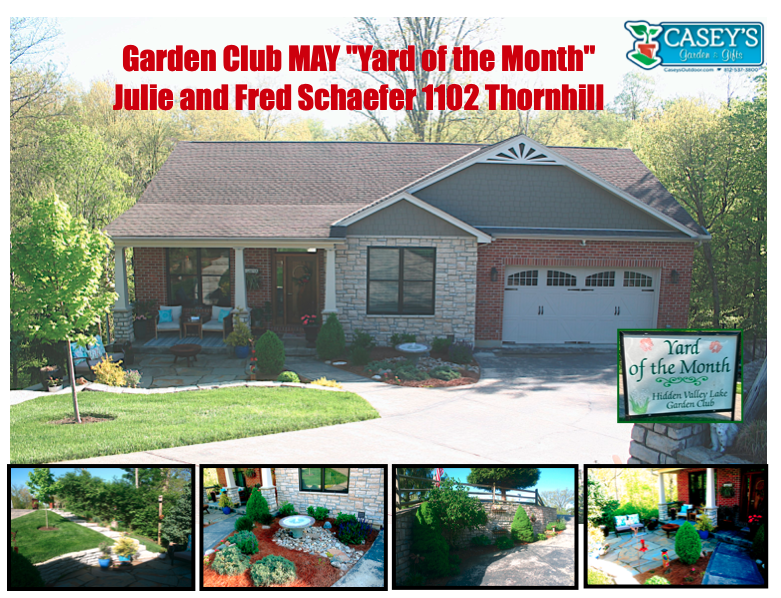 What you see now has been 15 years of trial and error.  There is a saying “There are never gardening mistakes, only experiments”.  We had the home built so we started with a blank slate.  Ask that time, Hidden Valley had a problem with deer overpopulation so we did a lot of research and were pretty successful in our landscaping choices, however, there were so many more flowers and bushes we would have loved to have incorporated.  Fast forward a couple years once the herd been culled, we pretty much tore everything out and started over.  We felt that the garden at the top of our lot would be a perfect spot to plant a wildflower “meadow”.  With some research we found a nursery that grows and sells plants indigenous to our area and they helped us choose plants and grasses with the goal of attracting bees and butterflies.  Once the plants are in bloom, there is always a lot of activity up there.  We have seen so many different species of bees which are especially attracted to the Narrow Leaf Mountain Mint.  We also planted Swamp Butterfly Weed which the Monarch caterpillars devour and by the end of the season all that remains are bare stems.  Last summer we took some Monarch caterpillars off the butterfly weed and placed them in containers so our grandkids could watch the whole process from caterpillar, to chrysalis, and then to a butterfly which they got to release.  Hopefully they appreciate how cool nature is.      Julie Schaefer. 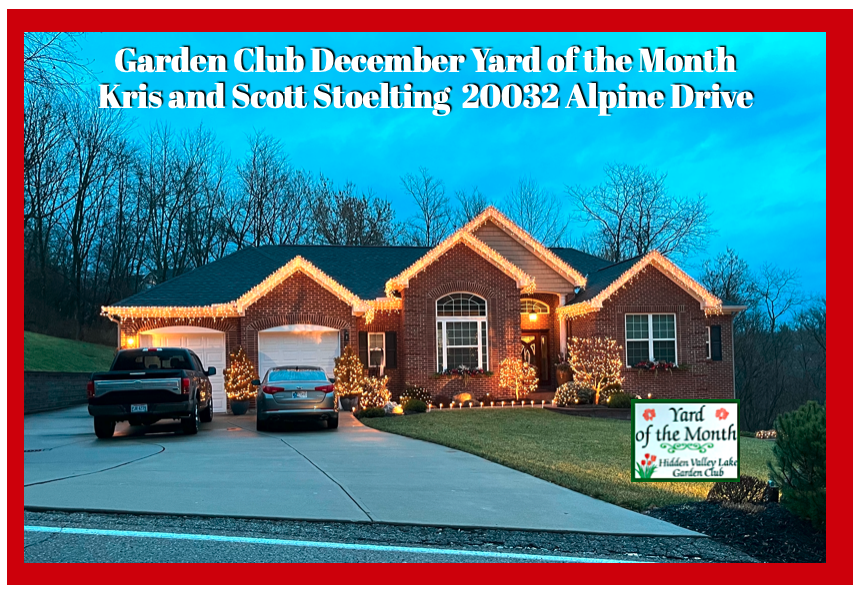 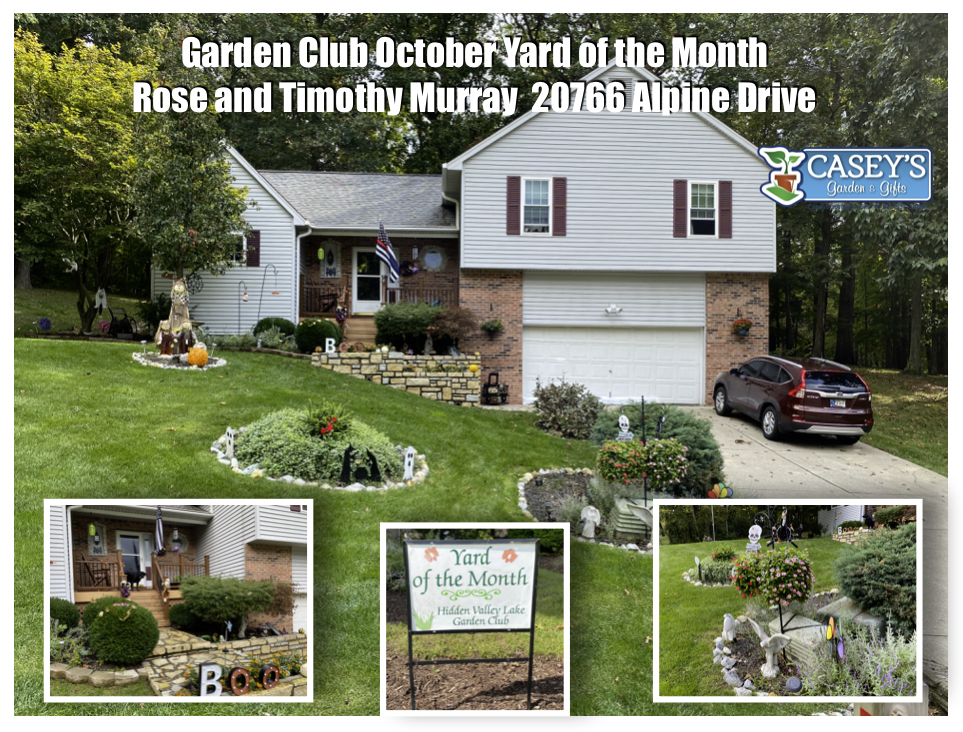 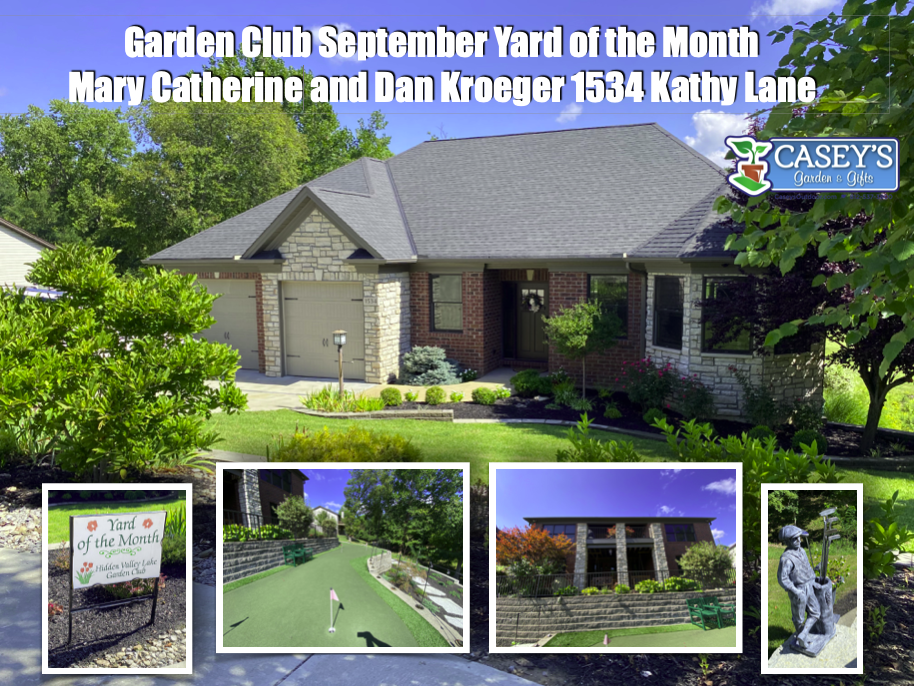 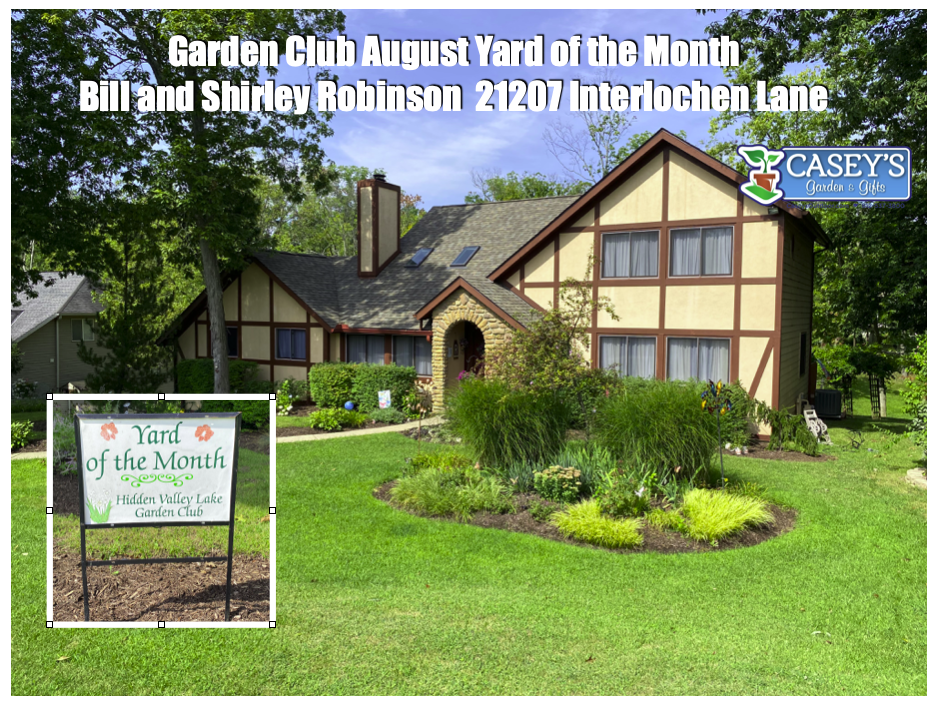 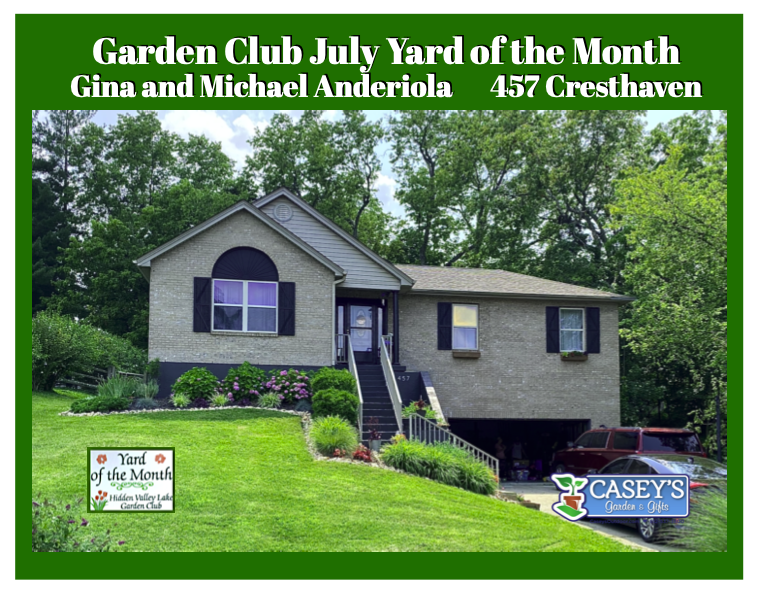 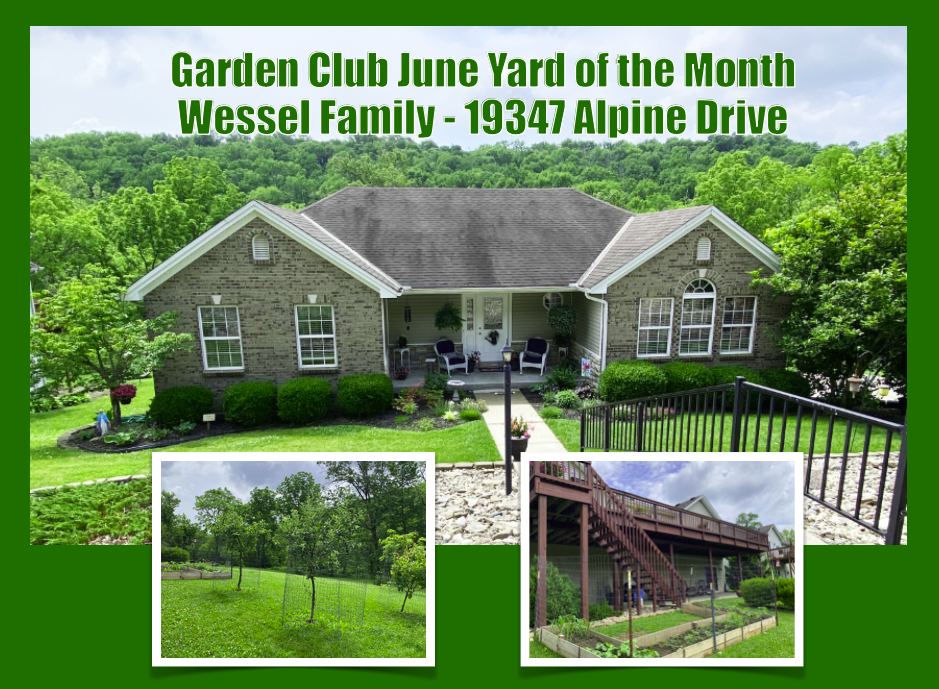 The Wessels reside on 19347 Alpine. They have been chosen to receive the HVL Garden Club’s June Yard of the Month.  Their beautiful yard  from front to back provide a landscape of beautiful flowers, bushes and newly planted trees.   The hillside view from their sprawling deck is “one of a kind” 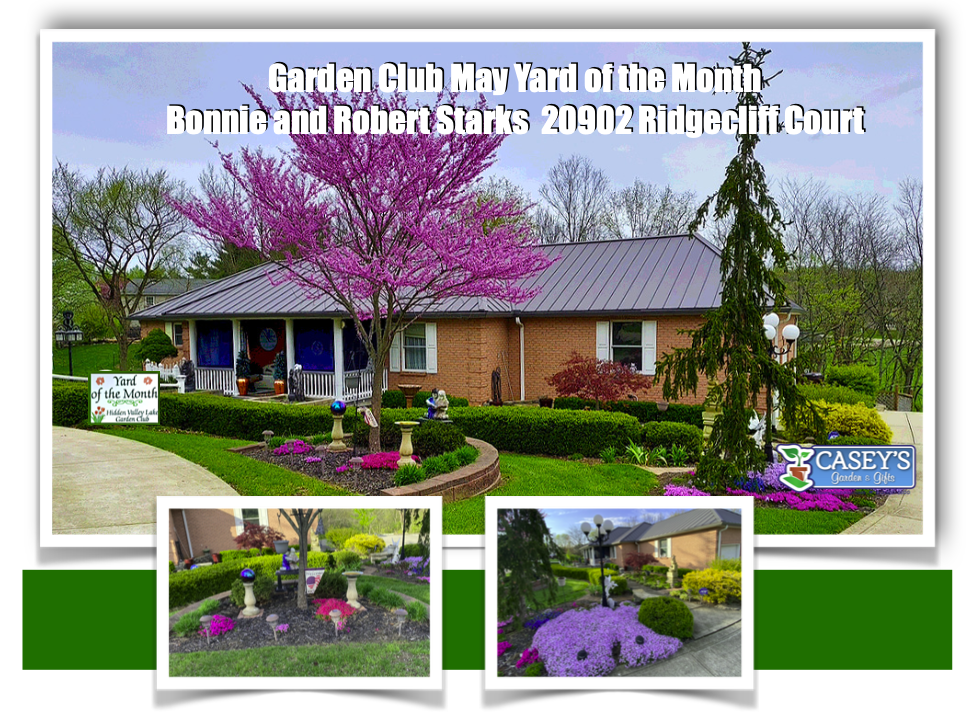 Bob and Bonnie Starks reside at 20902 Ridgecliff  Court.  They have been chosen to receive the HVL Garden Club Yard of the Month award for May.  Bob and Bonnie have resided in Hidden Valley for 22 years.  During that time both have been very involved in the community by serving on the POA Board and various Committees.  Congratulations to the Starks. 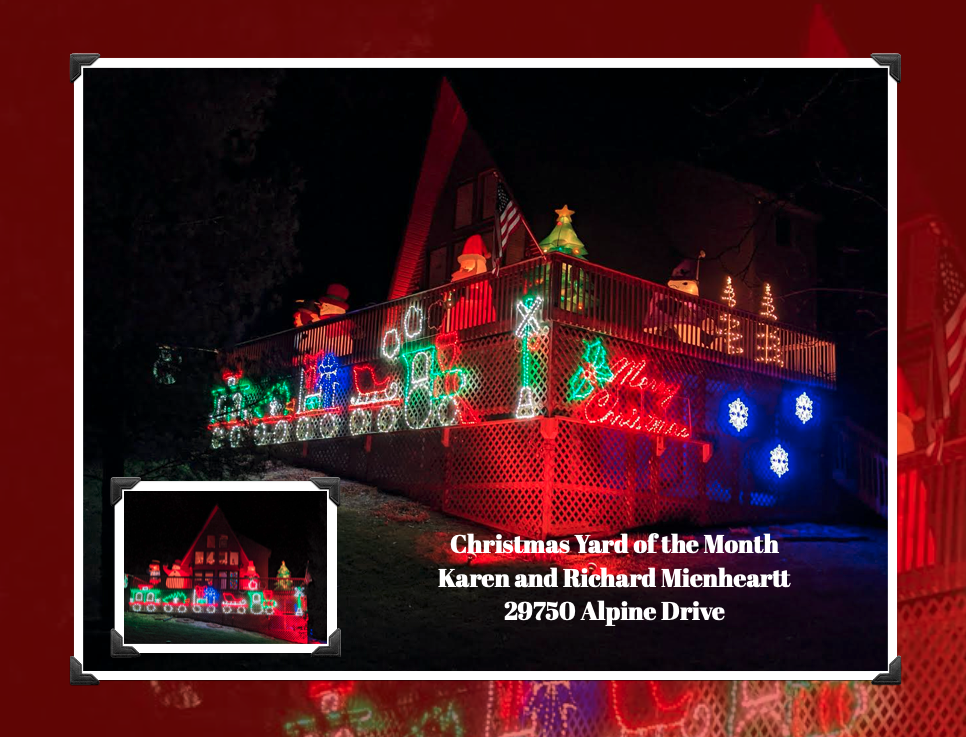 It was a very tough decision.  The decorations this year were extraordinary.  The Garden Club thanks all the residents who made Hidden Valley Lake a community of Christmas Spirit.   The winner of this years contest is Richard and Karen Mienheartt on Alpine.“Yard of the Month” Winners 2020 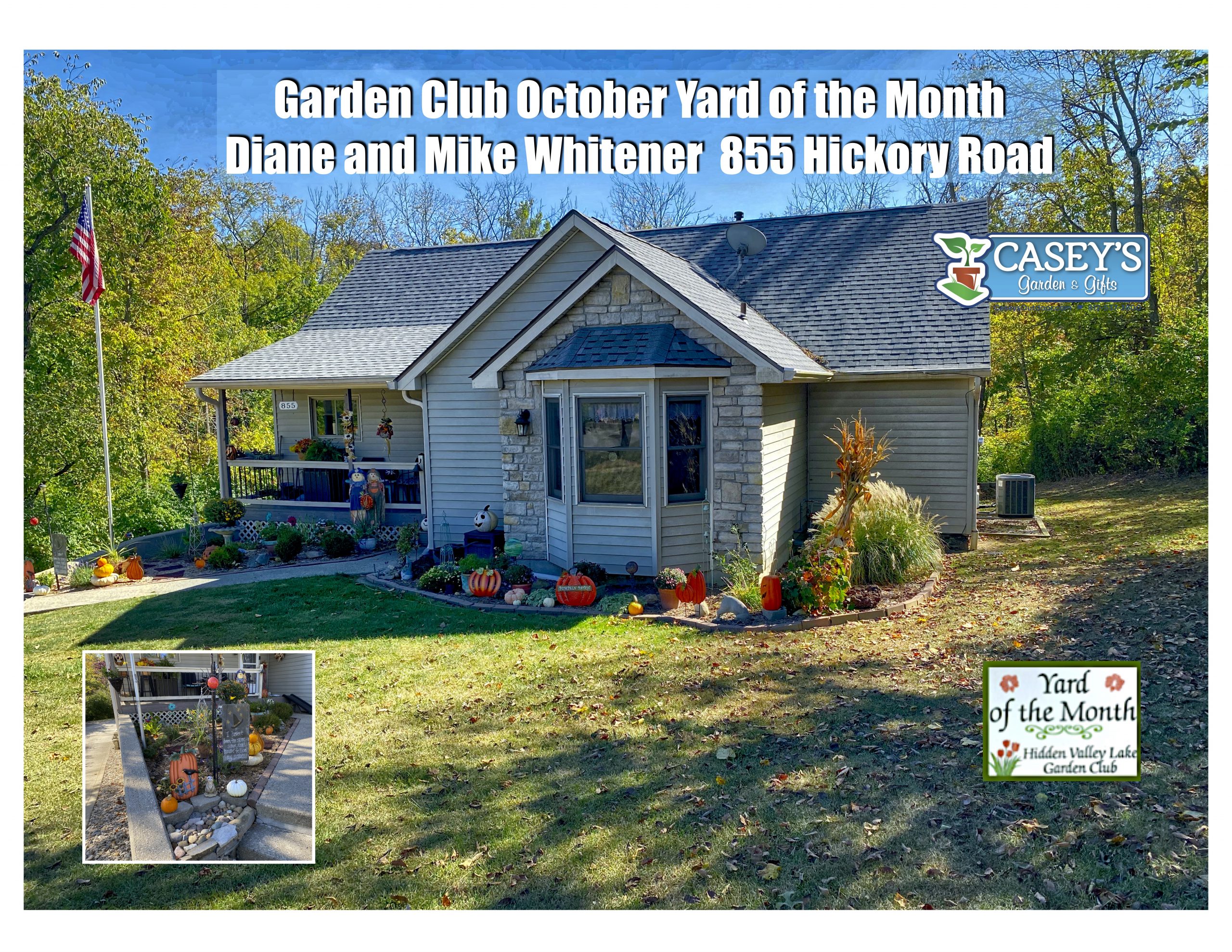 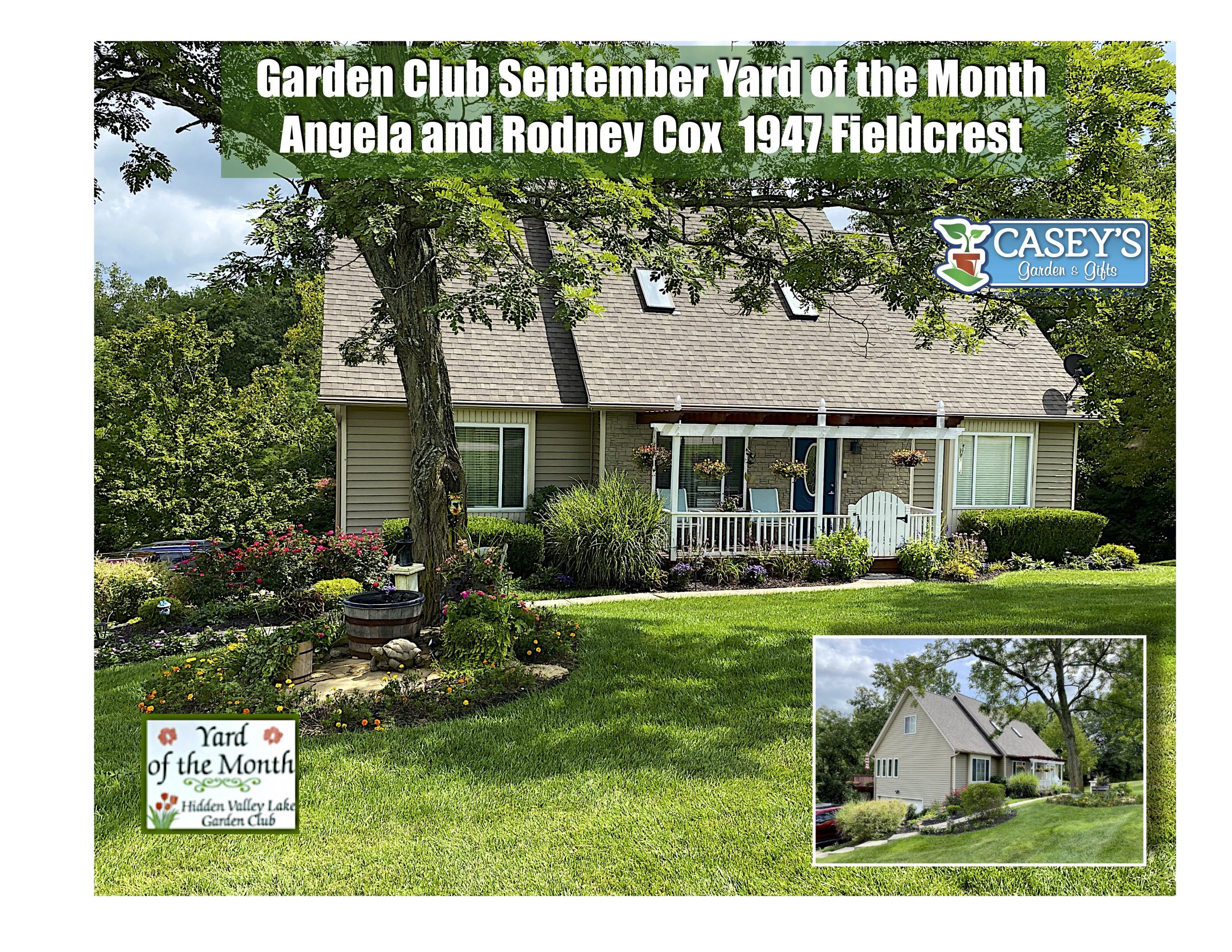 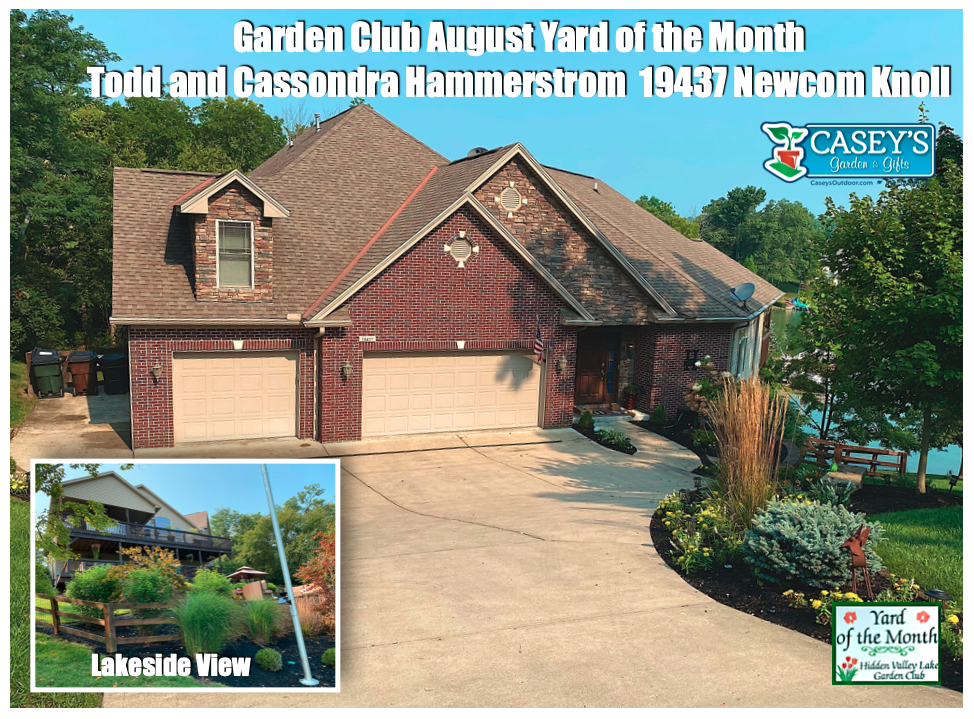 You can always tell when Spring arrives in Hidden Valley.   Following are just a few of the beautiful plantings in 2021 all around the Valley.   More to come and many more to thank for their beautiful work, design and creativity, keeping Hidden Valley Lake a beautiful community. 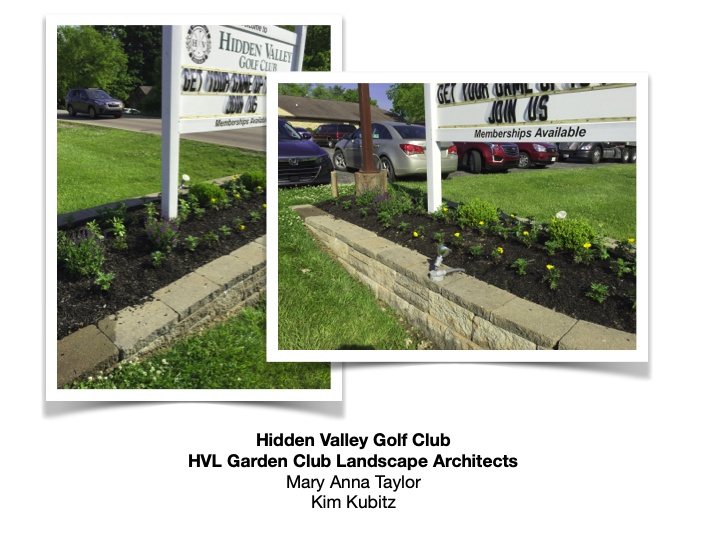 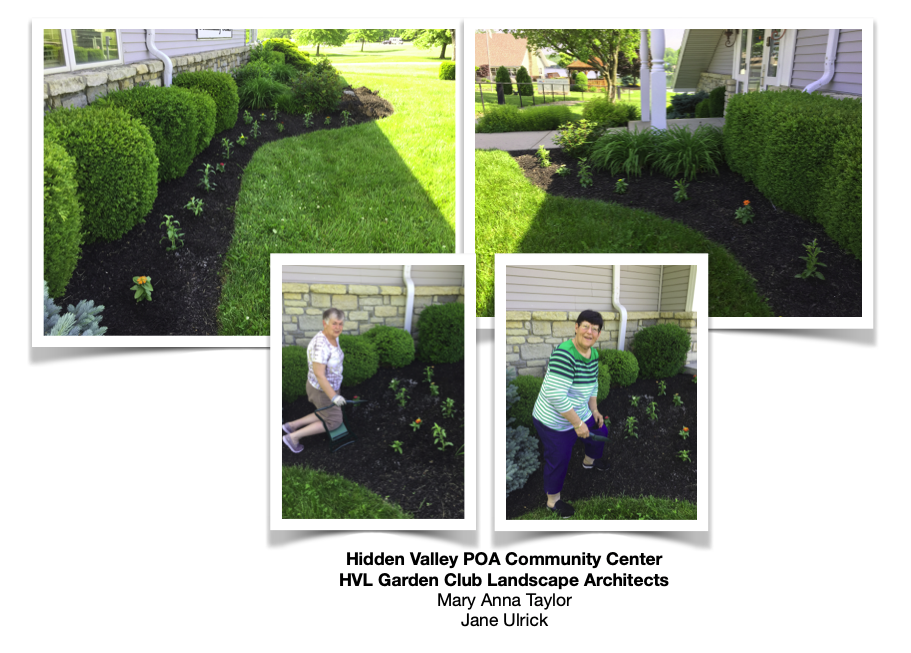 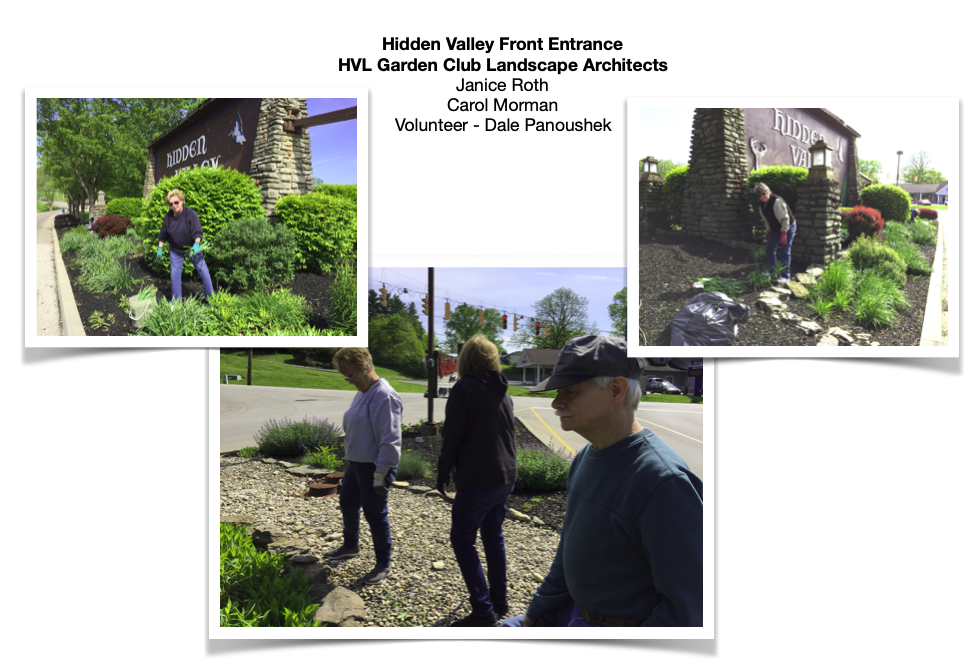 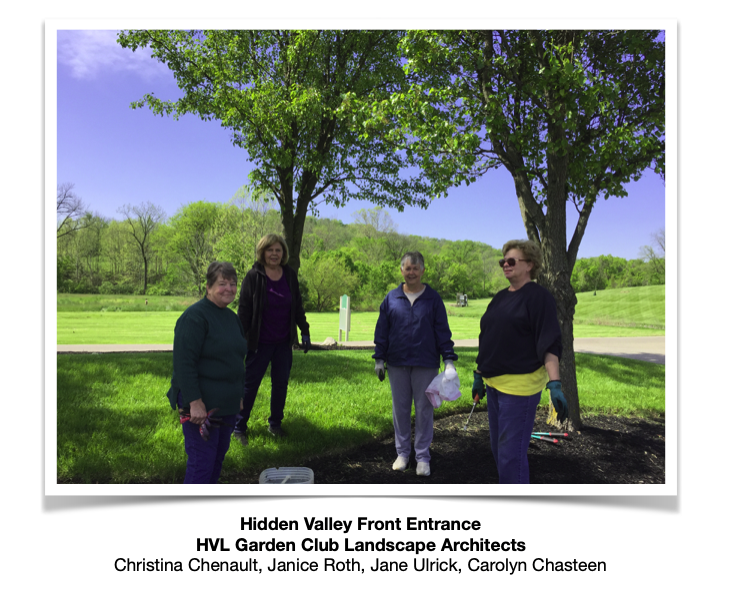 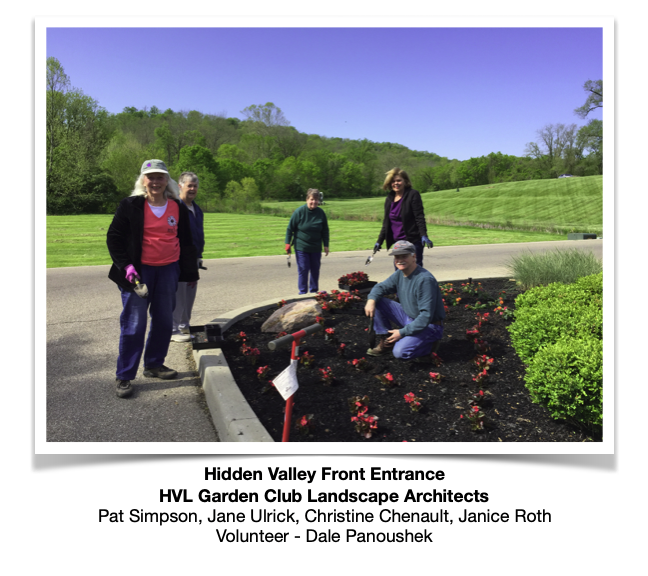 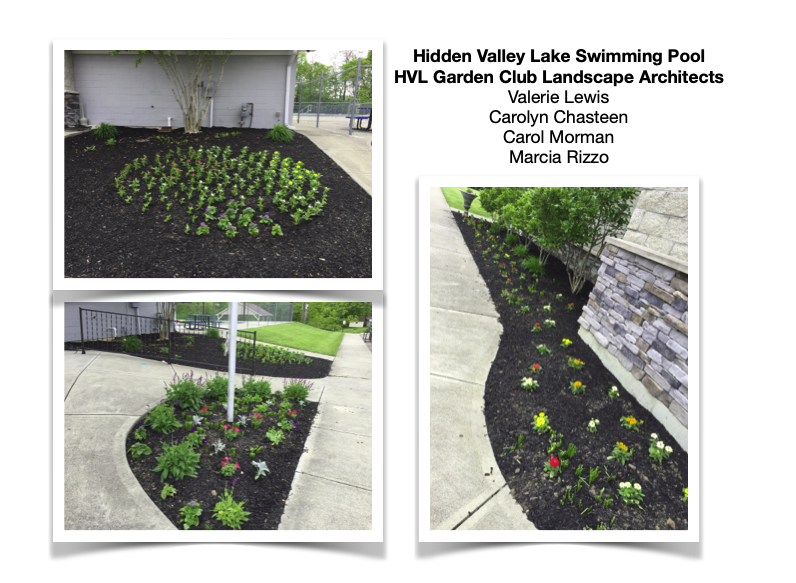 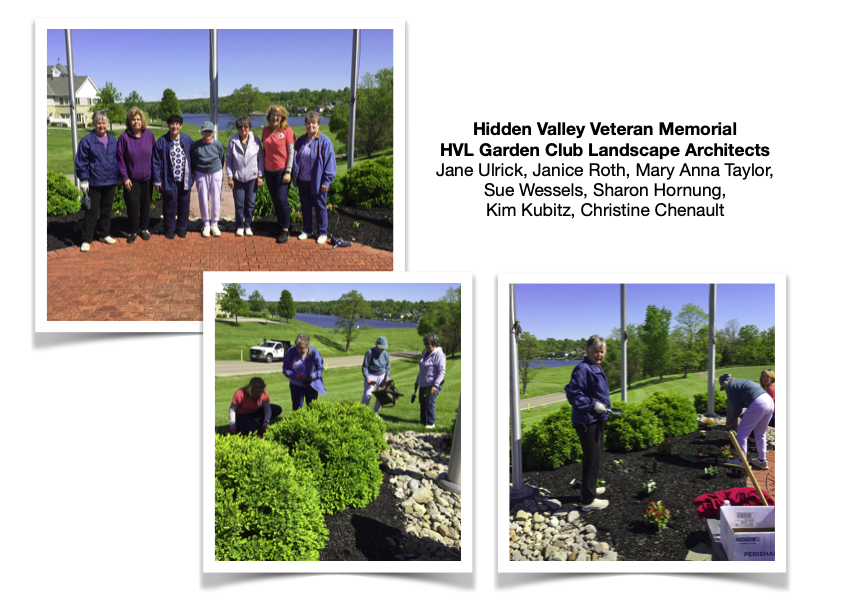 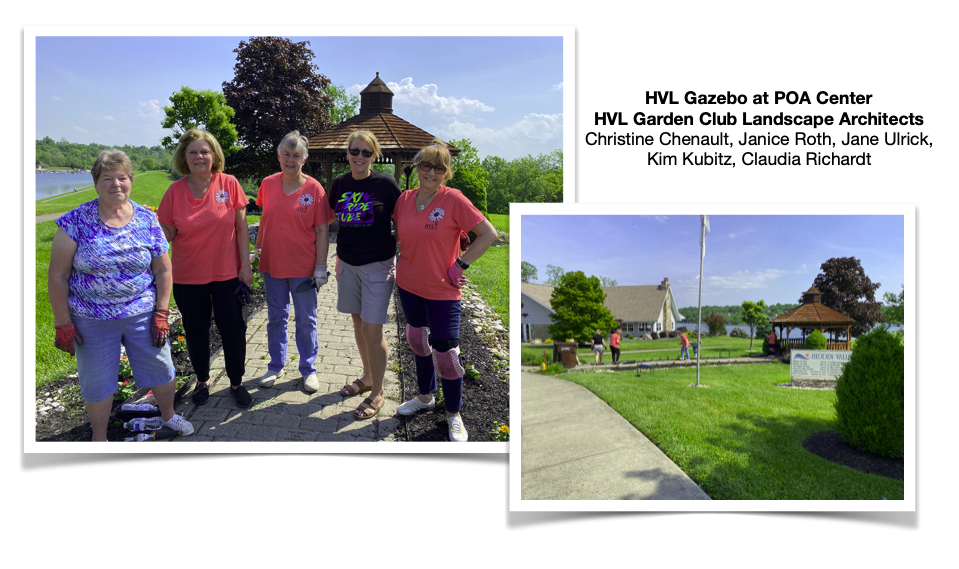 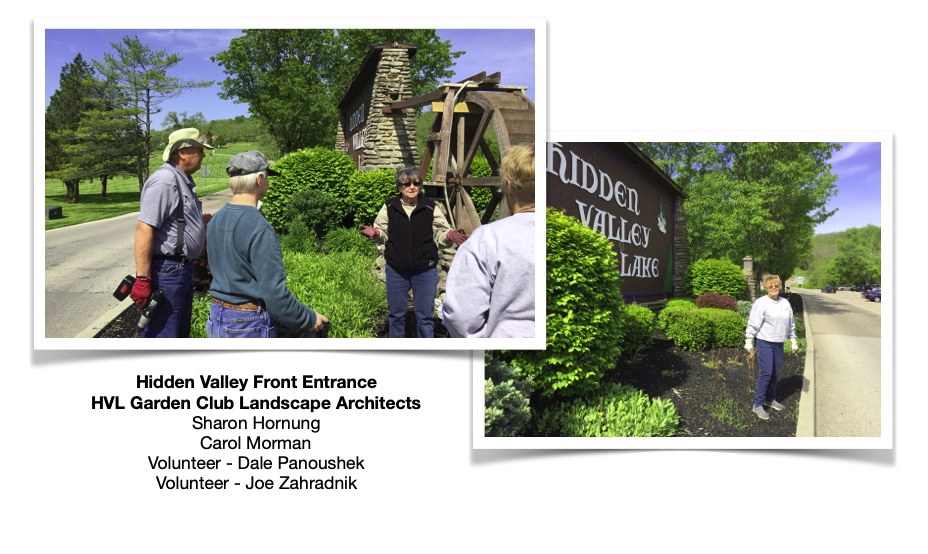 We would like to acknowledge Casey’s Outdoor Solutions for their continuing involvement in HVL Activities and Events.

Check out Casey’s monthly events located on the Community News and Events page.

Stay Up To Date